Erie, PA (June 21, 2022) – A nationally recognized firm headquartered in Erie, Pennsylvania published a pro-bono economic impact analysis today that found the Erie Zoo has generated more than $100 million in economic impact over the past five years. The study further concluded that the economic activity generates $21.2 million annually in Pennsylvania and that more than $17.8 million of those funds stays in Erie County alone.

Your Erie Zoo will be closing at 2pm on Saturday, June 25thto prepare for The Mane Event fundraiser. For more information about this event please visit: https://www.eriezoo.org/events/the-mane-event-celebrate-africa

The Main Building is Officially Open!

On Wednesday, May 25th the Erie Zoo is reopening their Main Building for the first time in over two years. As part of the zoo’s Wild Open Spaces Capital Campaign, construction on the building began in the fall of 2019 thanks to a generous gift from Erie philanthropist Tom Hagen. The goal of the project was to restore the building back to its historical 1930’s façade as well as make some minor improvements to the interior. Read the full Press Release below.

The Erie Zoo Office will be closed in observance of Memorial Day on May 30th. The Erie Zoo grounds will be open regular hours from 10am-5pm with last admission at 4:15pm. The zoo will also be welcoming all military, veterans, first responders, and front line workers in for free upon showing their badge or ID at the admission window. Thank you to all who have served - Happy Memorial Day! 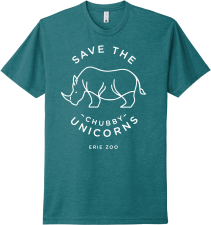 Chubby Unicorn Shirts Are Back!

They're back! And with a fresh new look!

PRE-SALE for the new Save the Chubby Unicorns t-shirts starts now and runs through May 23rd! $5 of every shirt will go back to the International Rhino Foundation and rhino conservation!
*Sale Closed*

Your Erie Zoo is open regular operating hours of 10am-5pm with last admission of 4:15pm for Easter Sunday. The Children's Zoo Concession stand, Safariland Express Train, Wildlife Carousel, and Gift Shop will all be open their regular Sunday operating hours weather and attendance permitting. The Main Stand Concessions will be closed. You can find all amenity operating hours under our "Visit" tab.

The Erie Zoo will not be hosting the annual Erie Zoo Parade in 2022. At this time the zoo is focusing its resources and efforts towards progress on the zoo grounds to enhance our visitors' experience. We apologize to the community for absence of this beloved event and thank you for your understanding as we work on a new and exciting chapter for you at your Erie Zoo.

The Flo Fabrizio Ice Center is closed for the season other than previously scheduled private ice time. The ice rink will reopen in the fall of 2022.
If you are interested in renting the building this summer (no ice) for a large event, please contact Amie at afritz@eriezoo.org or (814) 864-4091 x226.

Office Closed Due to Weather

Your Erie Zoo Office is closed today (February 4th) due to the weather. Please feel free to leave a voicemail on our office line (814) 864-4091 or contact us via our online Contact form and we will respond on Monday, February 8th. Thank you for your understanding. Stay safe and warm, Erie! ❄

Erie, PA -- The Erie Zoo confirms the loss of accreditation by the Association of Zoos and Aquariums. While saddened by the news, the zoo team chooses to look at this as a learning opportunity, keeping their focus on providing excellent animal care and conservation education, while working on sustainable growth and advancement. The earliest the zoo can apply for reaccreditation is September of 2022.