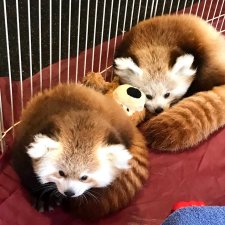 In July your Erie Zoo welcomed two red panda cubs, one male and one female. These cubs were first time offspring to Erie Zoo red panda pairing “Pumori” and “Delilah.”

On a routine check a few days after the birth, the animal care and veterinary staff noted the cubs were failing to gain weight. After talking to the red panda SSP (Species Survival Plan) coordinator from the Knoxville Zoo and discussing possible options, the decision was made to remove the cubs and focus on hand-raising them to ensure their progress.

Sadly, in August the female cub passed suddenly as a result of complications from a heart defect. The Zoo decided to delay public announcement until full results of the necropsy were received. While this passing brought great sadness to the Zoo team, it also brought a beautiful surprise.

On September 17th “Joe” joined the Erie Zoo family and became “Neo’s” new companion. Research shows that red panda cubs do best when raised together so this match was a great opportunity for continued healthy development for the two males.

“Joe” was born as a single cub on June 16th to parents “Gansu” and “Degan” at the Knoxville Zoo. The decision to hand-raise the cub was made after parenting problems became apparent to the zoo staff. “Joe” is roughly 3 weeks older than “Neo.” Introduction of the red panda cubs has gone extremely well and both are thriving with their new playmate.

Public viewing of the cubs will be available beginning Thursday, October 1st through the back windows of the Adventure Center building in the Children’s Zoo. Viewing will be 10am-4pm daily with intermittent privacy breaks for care of the infants.