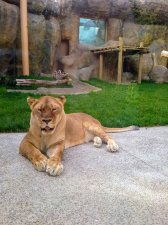 Erie, PA – The Erie Zoo is honoring the memory of senior resident African lion Nala, who was humanly euthanized today, September 12th, 2022, surrounded by many of her loving caregivers.

At an impressive 24 years of age, Nala had far surpassed the average lifespan of 10-18 years for African lions. At the time of her passing, she was one of the oldest African lions in the world. Nala was being treated for age-related issues common in cat species including kidney failure, arthritis and, most recently, muscle loss. During her later years, she was monitored daily by her animal care and veterinary teams who dedicated themselves to providing her a comfortable and enriching life. This weekend Nala’s care team made observations that indicated her quality of life was diminishing rapidly and the difficult decision was made to euthanize her.

Nala has been a beloved member of the Erie Zoo since she arrived in October 1998. Since then she has been affectionately dubbed the “Queen of the Erie Zoo” in reference to her tendency to do things on “Nala time” rather than her keepers’. Throughout the last few summers, she was always greeted enthusiastically by visitors and staff when it was warm enough for her to venture to the outside habitat. Nala loved nothing more than soaking up the sunshine squinting her eyes with her tongue hanging out. She was a part of over two decades of Erie Zoo history including the debut of the John M. and Gertrude E. Petersen African Lion exhibit in 2018. Nala survived her mate, former Erie Zoo resident Simba (1994-2008), and her three offspring Zuri (2000-2015), Zaki (2000-2020) and Erie Zoo lioness Jala (2000-2017).

“Our veterinary and animal care teams have done an extraordinary job caring for Nala, especially as she began showing irreversible symptoms related to her age. With all of the animals here at the zoo, we make a commitment to provide them with the highest quality of life from the moment they come to us until it’s their time to go. It is because of this dedicated and meticulous care that a significant population of them far surpass their median life expectancy. We feel privileged to have been able to share a lifetime with Nala and it is with heavy hearts that we say goodbye. She will be missed dearly by us and many in our community,” said Roo Kojancie, Chief Operations Officer.

Nala served as an ambassador to her species, African lions, which have been classified as Vulnerable by the IUCN Red List. The population of African lions in the wild has decreased drastically over the past couple of decades due to threats like loss of prey, habitat loss, and poaching. The Erie Zoo continues to contribute to wild African lion conservation and education with current lioness ambassadors Eva and Desta.

The Erie Zoo is dedicated to nurturing an appreciation of the world and providing the Erie community with meaningful educational and recreational experiences that foster a greater sense of awareness, stewardship and conservation of animals and plants. The Erie Zoo is open daily from 10am-5pm and more information can be found at www.eriezoo.org.