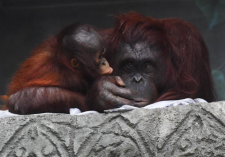 A Statement from the Erie Zoo Addressing the Orangutan Incident:

"We appreciate all the thoughts and concerns regarding the incident at the zoo last evening. As of right now, we are respecting the privacy of our staff. We can assure you that “Dasa” the orangutan was contained the entire time and was never out of her exhibit. Additionally, the keeper was at no time ever inside the exhibit with the orangutan. There will be no actions taken against “Dasa” the orangutan, and we hope for full recovery of our keeper. The situation is being fully investigated."

A male zookeeper suffered puncture and bite wounds to an arm when he was attacked by an orangutan.

An Erie Zoo employee suffered bite and puncture wounds to an arm when he was attacked by a female orangutan Saturday afternoon inside an exhibit in the zoo’s main building, Erie Zoological Society CEO Scott Mitchell said.

The 29-year-old man, whom Mitchell said is a zookeeper, was taken to Saint Vincent Hospital for treatment. He suffered moderate injuries, according to Erie County dispatch.

Mitchell said the employee was in a corridor adjacent to the exhibit, which contained Dasa – a 28-year-old female orangutan – a male orangutan and a male baby orangutan.

“She is a very inquisitive orangutan and typically is not an aggressive orangutan,” Mitchell said. “My guess is she was inquisitive and reached out to see what she could grab and grabbed his arm.”

The man suffered puncture and bite wounds to an arm, authorities reported.

Mitchell said the female orangutan arrived at the Erie Zoo when the orangutan exhibit opened in 2000.

Mitchell said Saturday evening that he had not yet had an opportunity to speak to his injured employee about what happened.

“We’ll review that exhibit and that space,” Mitchell said. “We’re hoping for a full recovery of our employee.”